Michelle Obama Can Do The Dougie

Michelle Obama Can Do The Dougie 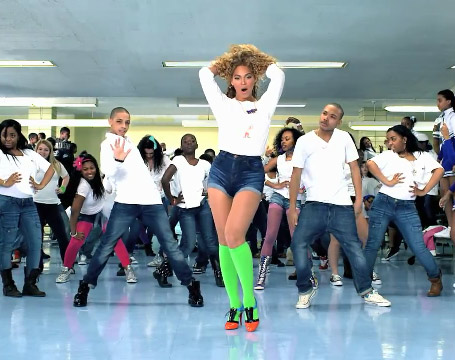 “Let’s Move!” not only to Michelle Obama’s anti-obesity campaign, but to the latest Beyonce song, “Move Your Body”.  America’s First Lady and the first lady of R&B have joined forces in the fight of childhood obesity… while dancing the “dougie”.

Let me see you run

put your knees up in the sky

’cause we just begun…

Michelle Obama will soon be celebrating her one-year anniversary of her “Let’s Move!” campaign. With the combination of promoting a healthy diet, exercise, and providing resources to help kids and adults create an active lifestyle, Obama’s focus on changing the obesity epidemic has been nothing short of inspirational. And she’s just begun.

The First Lady Can Dougie

This is how we do

jump a couple to the right

to the left, let’s move!

Americans are at an all-time high with their weight and statistics show that one out of every three kids are obese, but all it takes is that one step. It takes one step to start your own movement, whether it be making better food choices or even performing Beyonce’s “Flash Workout”.

It takes one step to make the healthy choice.

It takes one step to start the effort.

It takes one step to jump into action.

Can you dougie with me?

Throw your own lil’ swag on this swizzy beat!

Beyonce Knowles is no stranger to the public eye. Her incredible voice has landed 16 Grammy’s, leading roles in feature films, and of course frenzied paparazzi trying to take the most unflattering pictures followed by ridicule of her size. But Beyonce rises above the negative and turns the tabloids into a celebration of showing off her curves; or better yet, her “bootylicious” self. Some say full-figured, others say fabulous. And whether you are “ready for this jelly” or not, Beyonce is a strong, healthy woman fighting the fight of obesity using her own lil’ swag.

I ain’t worried doing me tonight

Don’t just stand there on the wall

Everybody just move your body.

Exercising is a key element to a healthy, active lifestyle. Beyonce’s new craze, “Move Your Body” is taking exercise to a whole new level; and most of all, she’s reaching a new and greater demographic…kids.

Exercise is considered a hassle or an obligation more often than it is empowering But perhaps Michelle and Beyonce can help those in need of a positive outlook when it comes to the active lifestyle.

In short, exercise can be fun….who knew?!

We NEED to stop standing against the wall.

We NEED to lift our feet off floor.

We NEED to be ourselves and move our bodies and our mindsets.

Let’s move. And let’s move our bodies towards the movement of anti-obesity.