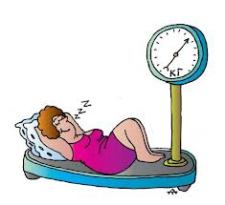 I know what your thinking as you read this. Is he out of his mind? It may sound insane but I think I might have found a method to take off those unwanted pounds.

If I could just go into a temporary induced coma, I could easily deal with food.

There would be no way I would have to be bombarded by the slew of television commercials pushing pizza, burgers and cookies.  I wouldn’t have to drive by the more then fifty restaurants calling my name on my drive home. There wouldn’t even be those temptations brought in by my fellow co-workers with donuts or other goodies every workday. I wouldn’t even have to exercise as hopefully someone would do that for me.

So within three to six months after being in a coma, I should theoretically be thin again.

This all sounded pretty appealing to me. Maybe I just helped to conceive the latest and greatest new diet fad.

Well after thinking it out, I began to see the other side to this ridiculous idea. Coming out of my coma would require weeks of rough physical therapy. Possible brain damage  and worse of all, things would be no different.  I would have to face all of the eating problems that bombarded me to begin with all over again. Like some cruel and ironic joke, the weight would come back on faster then I took it off.

So where is the escape. I just can’t get away from it all.

Unless I turn off the TV, shut down my computer, put away my smart phone and stop driving my car… I will never be able to escape this mess.

This is why I am searching for new methods to help me come to terms with the reality and culture that surrounds me today.

There must be something that I can change or do.

There is gastric bypass surgery, then the gastric band and even deep brain stimulation surgery going on now. Certainly none of those are looked at as extreme anymore, are they?

What actions could I take that would actually make a difference.

There must be better and less drastic methods then any of these.

Well much to my prayer and surprise, It turns out there were a good number of them available to me now.

While I can’t change my surroundings, I can start to adapt. The first thing I changed was to not eat while watching television or surfing the web. This gave me a chance to actually taste my meal and remember it later on so I could feel satisfied and full.

The next thing I did was to go pull up the nutritional menu online of some of those many  restaurants I frequent. They all make it easy to find this information and it’s pretty shocking. Not only are some foods crazy in calories but others aren’t all that bad. This would give me a chance to make the best plan of attack next time I stop there and lets not kid ourself… I will stop there. Eating at home everyday can be a bit boring. Food is entertainment these days and I want to learn to be a good critic.

The next task was to find a great support group like Weight Watchers or Over Eaters Anonymous.  That will help me work within the current environment I am surrounded by. Weight Watchers has the greatest new program of all with their 360 change.

The last thing I would promise myself is not to try and rush the weight loss. Every time that has happen before, I ended up putting back on all the pounds and more. Most of it faster then I lost it.

So it appears that right now for me, the coma diet is not going to be needed at all. Food does not need to be the enemy.

Just as long as a good plan of attack is in place to help me get through the rough times and current environment we live in within today.